The new office is located in Singapore’s Maxwell Chambers, home also to ICC’s Asia Regional Office and the ICC Academy, forming part of a growing presence for ICC in Singapore and South Asia. During its first months of operation, the case management team will comprise a counsel, a deputy counsel and an assistant. It will progressively expand by accommodating additional deputy counsel and assistant positions.

The opening of the case management office in Singapore in addition to the appointment of ICC Court directors in South Asia (Abhinav Bhushan) and North Asia (Mingchao Fan), reflects the ICC Court’s strong commitment to meet the expectations of its users.

Mr Mourre said: “Singapore is synonymous with excellence and ICC will contribute to that reputation by offering the highest standards in dispute resolution to meet the demands of users in Singapore and beyond. We are already seeing a growing number of cases featuring Singapore parties, arbitrators and Singapore laws and our new case management team here in the country will bring the benefits of our flexible and globally recognized services to even more users in the region.”

According to recently released ICC dispute resolution statistics, Singapore retained its position as the number one ranking place of ICC Arbitration in Asia in 2017, the eighth year in which it was ranked as ICC’s top arbitration seat in Asia. The statistics revealed a total of 810 new cases filed in 2017 from a record 142 countries.

Singapore was chosen in 38 of 79 new cases seated in South and East Asia, moving up from 6th to 5th most popular place of ICC Arbitration following France (121), Switzerland (90), the United Kingdom (73) and the United States (51). Click To Tweet
In the South and East Asia region, Singapore accounted for close to 8% of all parties represented in an ICC arbitration, following Korea (20%), India (19%) and China (16%). Click To Tweet

Under the globally recognized ICC Rules of Arbitration, parties don’t have to have any connection to the country, or to ICC, to arbitrate in Singapore. The ICC Rules of Arbitration and arbitration agreement do not limit the free choice of parties when it comes to determining place and language of the arbitration, or even the law governing the contract. In new cases registered in 2017, Singapore laws were specified as the applicable law in 23 contracts, a rise of over 40% compared with 2016 figures. This reflects a growing trend of Singaporean law use in business contracts across Asia.

On 10 April 2018, ICC joined forces with the Singapore Business Federation (SBF) to host an information sharing session on ICC Arbitration for arbitration professionals or anyone eager to engage with the ICC International Court of Arbitration through the SBF which is also ICC’s national committee in Singapore. 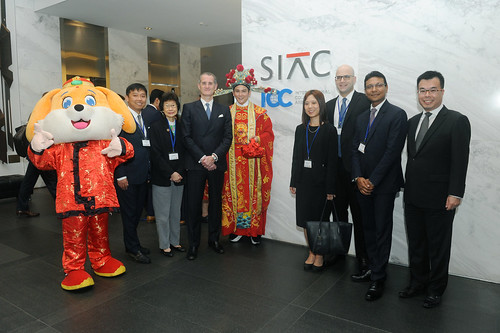