According to the latest figures, a total of 810 new cases were filed in 2017 – slightly lower than the 966 cases filed in 2016, which included 135 cases related to a set of very small claims in a collective dispute.

ICC Court President Alexis Mourre said: “These figures confirm that due to its unique quality and its signature quality control process of awards, ICC is by far the preferred institution for high-value, complex multi-party and multi-contracts disputes across the globe.”

The trusted institution for State and State entities disputes

The number of States and State entities that were parties to arbitral proceedings initiated in 2017 rose to over 15% from 11% in 2016.

These figures reflect the unique experience of the ICC Court in administering cases involving the public interest. Mr Mourre said: “Among institutions dealing primarily with international commercial arbitration, ICC is clearly the preferred choice for States and State entities. This is a tribute to our policies aimed at establishing transparency and the highest level of ethics for all players in the process.”

In 2017, the ICC Court saw an increase in the total number of women arbitrators.

Women arbitrators represented 16.7% of all arbitrators nominated or appointed by the parties, co-arbitrators or by the Court. This represents an increase from 14.8% of nominations or appointments made in 2016.

The Court appointed a higher percentage of women (45%) than the parties themselves (41%) and the co-arbitrators (13.7%).

Mr Mourre said: “We will now double our efforts to significantly increase gender and regional diversity both in our appointments and in the Court’s membership”. The Court disclosed statistics on the gender balance of ICC tribunals for the first time in 2016.

Representing a growth of over 26% from 2016, 219 parties featured in ICC arbitrations in Central and West Asia in 2017. Iran, Kazakhstan, Qatar, Saudi Arabia and the United Arab Emirates all ranked in the top 50 countries both in terms of case numbers and number of parties represented. Collectively they represent over 15.5% of total parties.

Statistics for 2017 also reveal an increase of close to 8% in the number of cases from Latin America. Following the establishment of a case management team in Sao Paulo last year, Brazil rose to 7th place in case rankings worldwide, with 51 cases compared with 36 in 2016. Nine cases are currently being managed by the Sao Paulo team.

Marked growth in Oceania and Europe

Oceania saw a marked increase of 25% in new cases filed and a 3.4% growth in the number of parties represented. Figures also show a rise in the number of arbitrators appointed or confirmed by the Court from the region from 49 in 2016 to 56 in 2017.

North and West Europe meanwhile accounted for 784 parties, representing a growth of 4.8% from 2016. Figures also reveal a marked increase in the number of British (219) and French arbitrators (141) representing growth of over 14% and 9% respectively. Next in the ranking of number of arbitrators by nationality was Switzerland (116), the US (100) and Germany (99).

The ICC Court’s global footprint is set to increase further in 2018 with a new case management office of its Secretariat in Singapore due to be launched in the Spring and a new representative office of the ICC Court that recently opened in Abu Dhabi.

The number of challenges introduced in 2017 fell slightly to 48 from 50 in 2016. Only six challenges were accepted by the Court. In 2017, upon the request of one of the parties, the ICC Court communicated reasons related to three challenges, and one request for consolidation.

Following the introduction of Expedited Procedure Provisions (EPP) in the 2017 ICC Rules of Arbitration, 50 requests to opt in were submitted. Of these, 10 resulted in an agreement to EPP involving 20 parties from 16 countries. Three of these cases were concluded within the six-month time limit from the case management conference established under the 2017 Rules. “These figures are very encouraging. They show that the EPP are an effective response to the legitimate time and costs concerns of the business community,” Mr Mourre said. 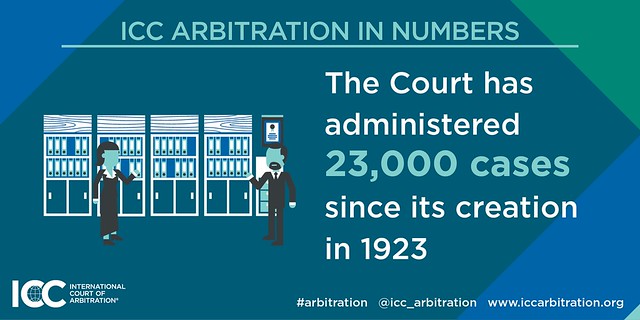