Celebrating the cultural, generational and gender diversity of ICC staff, the event also marked the fifth anniversary of the WBW staff-led initiative.

Participants were encouraged to highlight the concrete actions they would take to #BeBoldForChange, this year’s International Women’s Day campaign theme.

The personal commitments ranged from ensuring more efforts were undertaken to ensure diversity of speakers at events to monitoring and reporting progress made.

Speakers from several departments took to the floor to provide updates on the activities being undertaken across ICC to leverage diversity in its own activities.

Ms Faustin highlighted ICC Italy’s social media campaign, celebrating ICC Italy’s women members of staff and network who had contributed to its activities over the last year. Ms Faustin also spotlighted ICC Nigeria’s first International Women’s Day programme. Held in collaboration with the Network of Entrepreneurial Women (NNEW) the event considered ways to accelerate the 2030 Agenda and build momentum for the effective implementation of the United Nation’s Sustainable Development Goals, with particular focus on gender equality and the empowerment and education of women and girls.

Speaking on behalf of WBW, Steering Committee member Jose Godinho said that ICC was ideally positioned to lead by example and demonstrate to the business community how ICC is actively committed to gender equality.

Suggesting a number of diversity projects for WBW and the world business organization to consider in the year ahead, Mr Godinho encouraged input from all participants, underscoring that while the aim of the WBW work programme was to be ambitious, it also strived to be pertinent and helpful too.

Ms Vieilledent also highlighted leadership positions filled by women on the WCF Chairmanship and World ATA Carnet and Certificate of Origin Councils and noted a number of other WCF work areas where women leaders were being recognised. These included a partnership with the Oslo Business for Peace Award, which has seen a significant number of women nominees submitted from the ICC/WCF network.

Concluding her remarks, Ms Vieilledent said that WCF was also working hard to ensure gender representation was considered for the programme and speaker line-up for the upcoming World Chambers Congress taking place in September 2017.

Lauding the regional, generational and gender diversity of ICC staff, Mireze Philippe, Special Counsel at the Secretariat of the ICC Court and Founding Co-President of ArbitralWomen said that ICC could be proud of the progress and actions of the past few years to promote diversity.

World Business Women was launched in 2012 by ICC staff members to bring together and focus talent from within ICC, the world business organization, to help it become more gender balanced in its representation, while maximising the contributions of the women and men that make up its core assets. 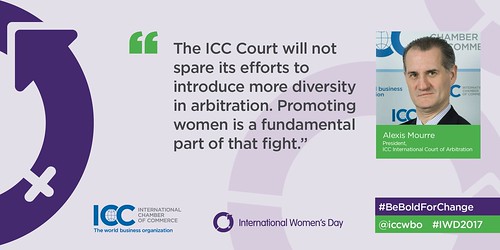