A total of 180 incidents of piracy and armed robbery against ships were reported to the International Chamber of Commerce’s (ICC) International Maritime Bureau (IMB) in 2017, according to the latest IMB report.

It is the lowest annual number of incidents since 1995, when 188 reports were received.

In 2017, 136 vessels were boarded, while there were 22 attempted attacks, 16 vessels fired upon and six vessels hijacked.

Beyond the global figures, the report underlined several takeaways from the past year. 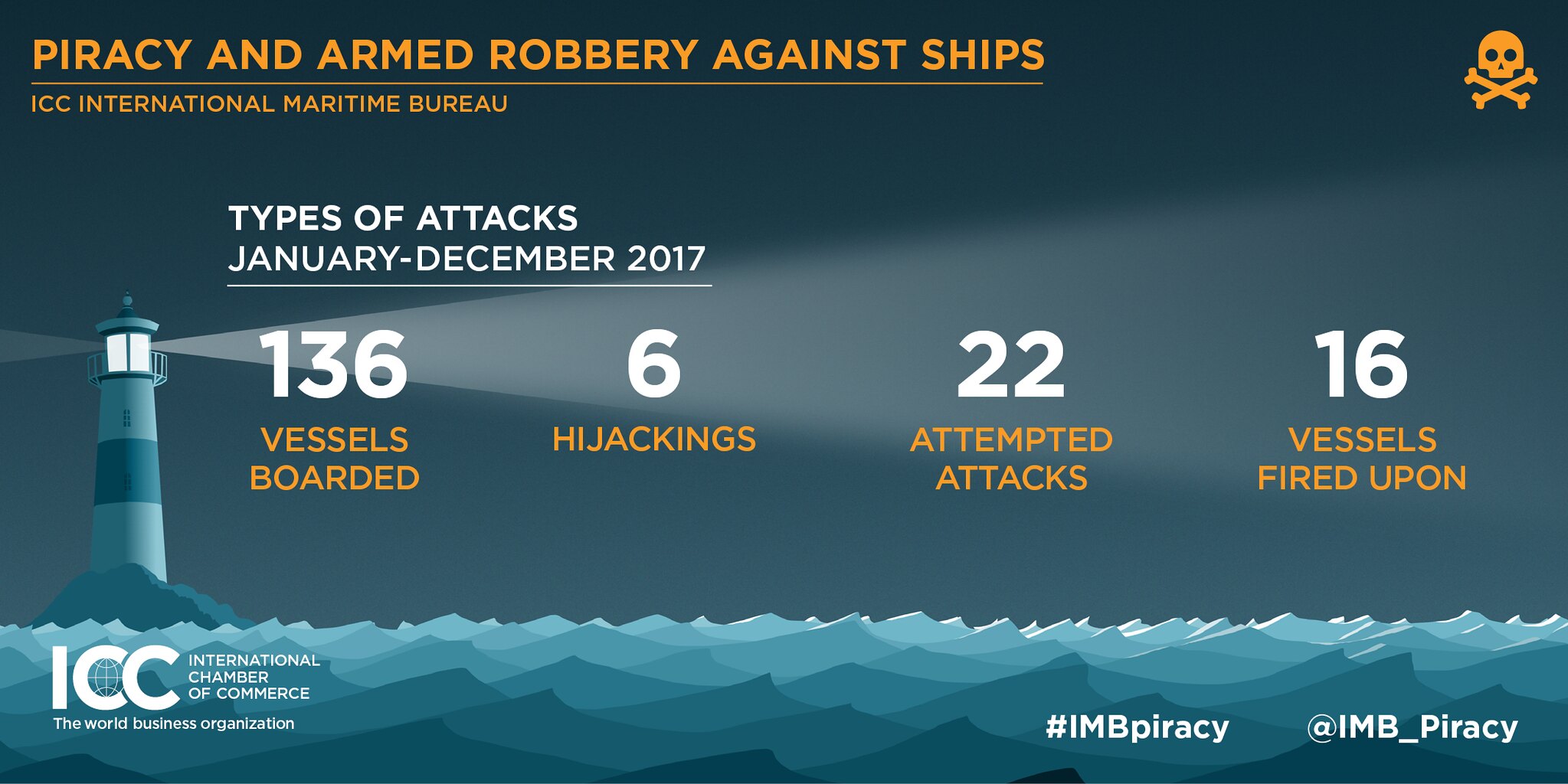 Persistent danger in the Gulf of Guinea

In 2017, there were 36 reported incidents with no vessels hijacked in this area and 10 incidents of kidnapping involving 65 crewmembers in or around Nigerian waters. Globally, 16 vessels reported being fired upon—including seven in the Gulf of Guinea.

“Although the number of attacks is down this year in comparison with last year, the Gulf of Guinea and the waters around Nigeria remain a threat to seafarers. The Nigerian authorities have intervened in a number of incidents helping to prevent incidents from escalating,” said Pottengal Mukundan, Director of IMB.

Nine incidents were recorded off Somalia in 2017, up from two in 2016. In November, a container ship was attacked by armed pirates approximately 280 nautical miles east of Mogadishu. The pirates, unable to board the vessel due to the ship’s evasive manoeuvring fired two RPG rockets, both of which missed, before retreating.

Six Somali pirates were subsequently detained by European Union Naval Force, transferred to the Seychelles and charged with “committing an act of piracy” where they face up to 30 years’ imprisonment if convicted.

“This dramatic incident, alongside our 2017 figures, demonstrates that Somali pirates retain the capability and intent to launch attacks against merchant vessels hundreds of miles from their coastline,” said Mr Mukundan.

Indonesia recorded 43 incidents in 2017, down from 49 in 2016. The IMB report notes that Indonesian Marine Police patrols continue to be effective in the country’s 10 designated safe anchorages. 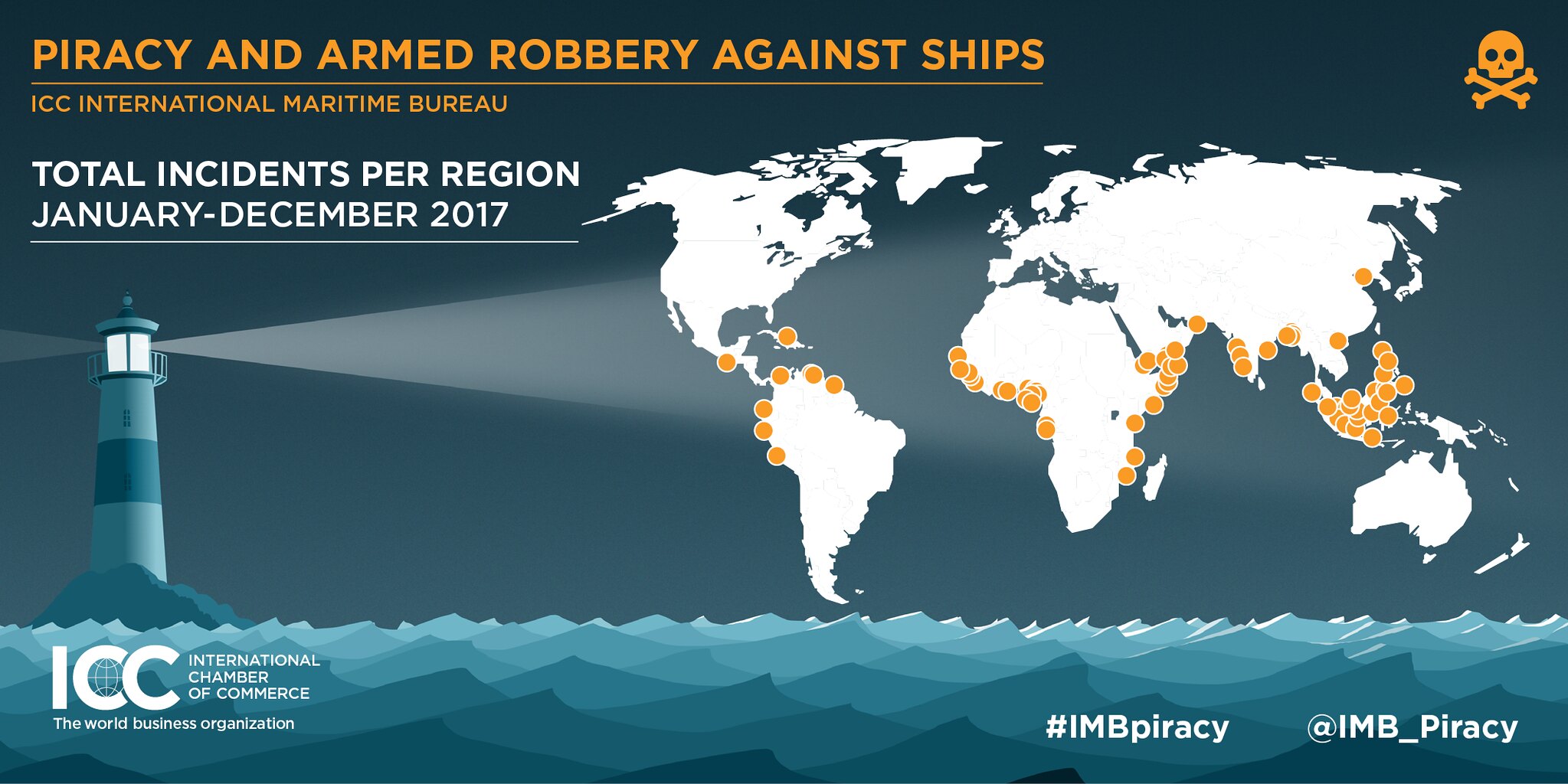 In the Philippines, however, the number of reported incidents has more than doubled, from 10 in 2016 to 22 in 2017. According to the report, the majority of these incidents were low-level attacks on anchored vessels, mainly at the ports of Manila and Batangas. Vessels underway off the Southern Philippines were boarded and crew kidnapped in the first quarter of 2017.  However, alerts broadcast by the IMB’s Piracy Reporting Centre (PRC), on behalf of the Philippine authorities, have since helped to avoid further successful attacks.

Launched in 1991, the IMB PRC is a 24-hour manned centre that provides the maritime industry, governments and response agencies with timely and transparent data on armed robbery incidents received directly from the master or owner of vessels. All attacks reported last year can be viewed online on the 2017 IMB Live Piracy Map. 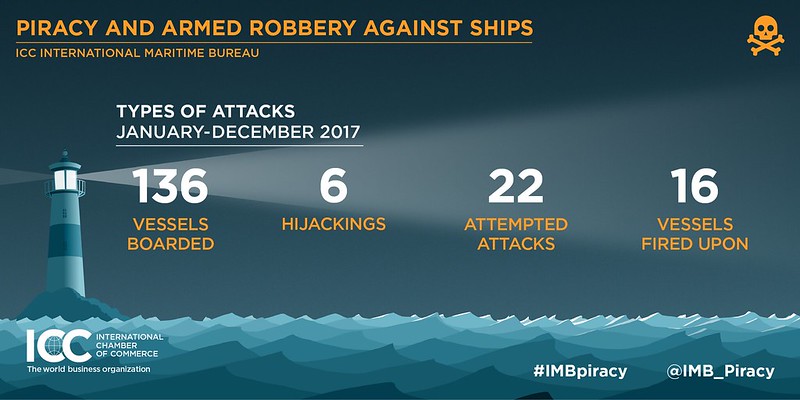