More crew were kidnapped at sea in 2016 than in any of the previous 10 years, despite global piracy reaching its lowest levels since 1998, the ICC International Maritime Bureau’s (IMB) annual piracy report revealed today.

In its 2016 report, IMB recorded 191 incidents of piracy and armed robbery on the world’s seas. 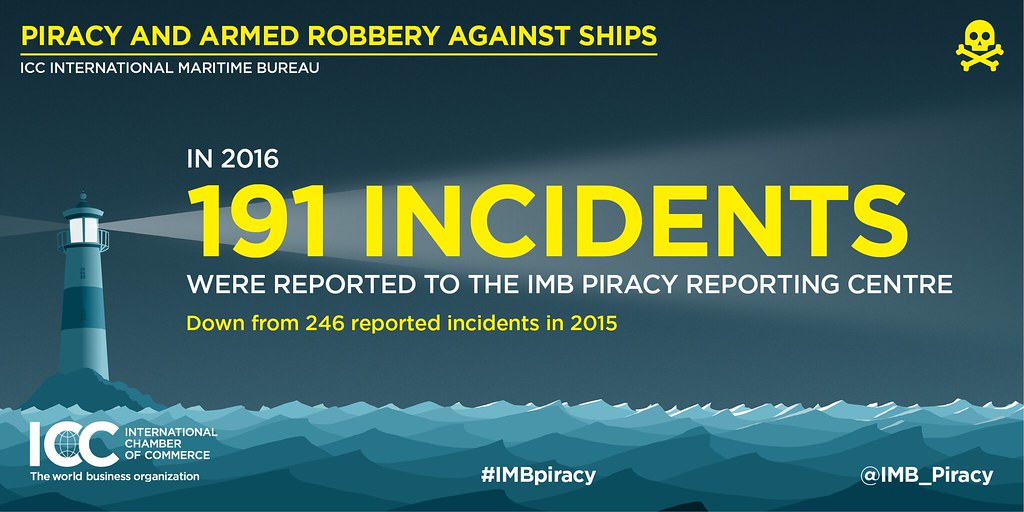 “The continued fall in piracy is good news, but certain shipping routes remain dangerous, and the escalation of crew kidnapping is a worrying trend in some emerging areas,” said Pottengal Mukundan, Director of IMB whose Piracy Reporting Centre (PRC) has monitored world piracy since 1991.

“The kidnappings in the Sulu Seas between eastern Malaysia and the Philippines are a particular concern,” he added.

Worldwide in 2016, 150 vessels were boarded, 12 vessels were fired upon, seven were hijacked, and 22 attacks were thwarted. The number of hostages fell to 151.

Maritime kidnappings, however, showed a threefold increase on 2015. Pirates kidnapped 62 people for ransom in 15 separate incidents in 2016. Just over half were captured off West Africa, while 28 were kidnapped from tugs, barges, fishing boats, and more recently merchant ships, around Malaysia and Indonesia.

IMB is urging governments to investigate and identify the kidnappers and punish them under law.

Mr Mukundan said ships should stay vigilant in high-risk areas. “Shipmasters should follow the latest best management practices and where possible take early action to avoid being boarded. They should inform the IMB PRC or regional counter piracy centres for help and advice,” he said. 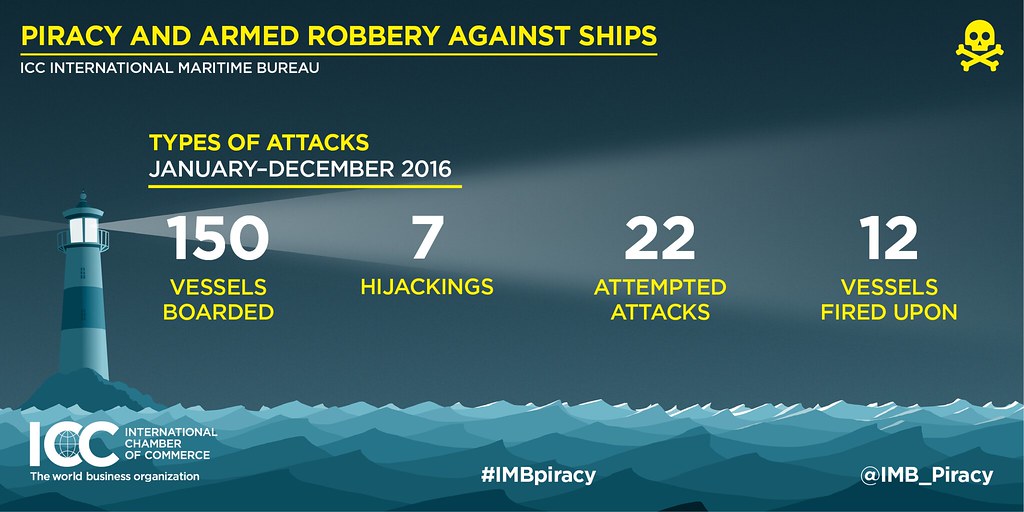 The kidnapping of crew from ocean going merchant vessels in the Sulu Sea and their transfer to the Southern Philippines represents a notable escalation in attacks.  In the last quarter, 12 crew were kidnapped from two cargo vessels underway and an anchored fishing vessel, and in November a bulk carrier was fired upon but pirates were not able to board the vessel. Earlier in 2016, crewmembers were kidnapped in three attacks on vulnerable slow-moving tugs and barges. 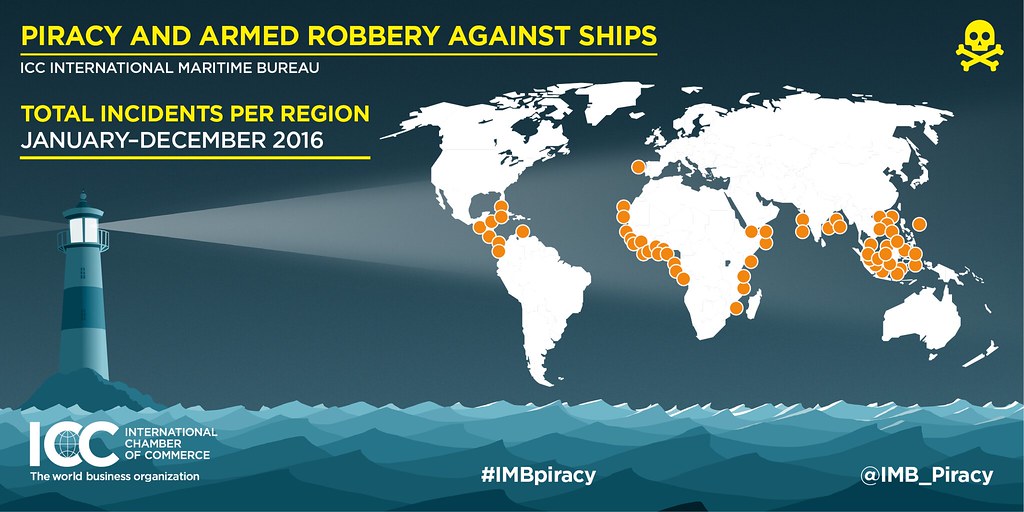 The Gulf of Guinea remained a kidnap hotspot in 2016, with 34 crew taken in nine separate incidents. Three vessels were hijacked in the region. There was a noticeable increase in attacks reported off Nigeria: 36 incidents in 2016, up from 14 in 2015. These included nine of the 12 vessels fired upon worldwide in 2016. Some were almost 100 nautical miles from the coastline.

Meanwhile, Indonesian piracy incidents fell from 108 in 2015 to 49 in 2016. Although the overwhelming majority were low-level thefts, vessels were boarded in all but three of the incidents.

IMB recorded two incidents off Somalia. Pirates attempted to attack a container vessel in the Gulf of Aden in May, and fired on a product tanker in the Somali basin some 300 nautical miles from shore in October. For IMB, this latest incident demonstrates that the capacity and intent to attack merchant shipping still exists off Somalia. 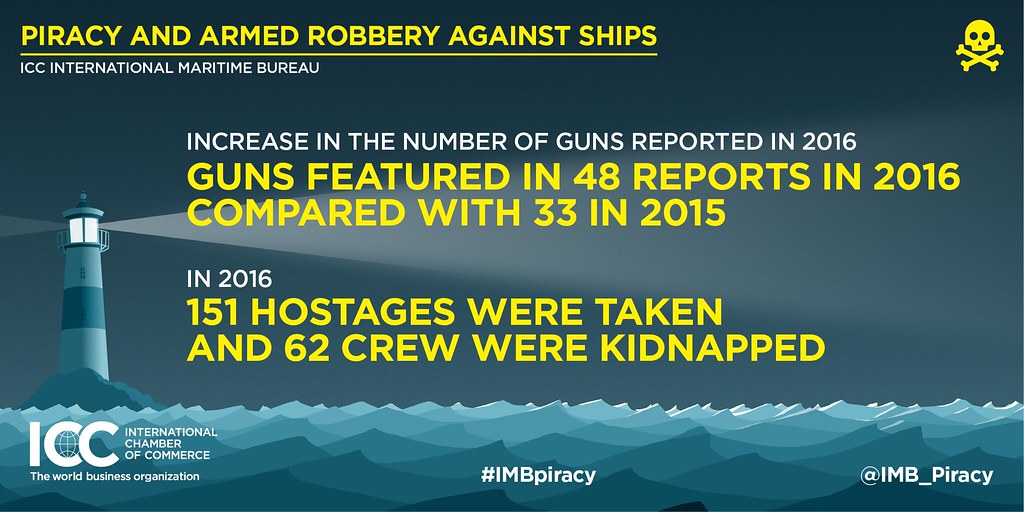 The IMB Piracy Reporting Centre is the world’s only independent 24-hour manned centre to receive reports of pirate attacks from around the world. IMB strongly urges all shipmasters and owners to report all actual, attempted and suspected piracy and armed robbery incidents to the IMB PRC. This first step in the response chain is vital to ensuring that adequate resources are allocated by authorities to tackle piracy. Transparent statistics from an independent, non-political, international organisation can act as a catalyst to achieve this goal.

IMB offers the latest piracy reports free of charge. To request a PDF version of the report by email, click here.